“Post consumer” looks like it will be the next “big thing” in packaging.  “Gen 1” was conventional fossil fuel plastic.  “Gen 2” was based on agricultural inputs.  It won’t work on a large scale because it would make food costs prohibitive.  Recycled content might be the compromise.

Consumers feel good about recycled content for whatever reason.

Until very recently, the two biggest hurdles were compliance with FDA food contact regulations and consistency.  While the FDA hurdle has not been cleared, the code has been cracked on consistency.  Some resin distributors ( not the majors of course ) have honed in on specific feedstocks which have  impressive consistency.

We started getting calls for post consumer about eight years ago. None worked out because of some subtleties.  For example, tamper evident deposit bags must be low to zero slip or the adhesive will not stick. If the film contains slip from reprocessed bread bags, the adhesive strip cannot anchor ( the 3 things that prevent pressure-sensitive tape from sticking are dirt, moisture and grease.  Slip is basically a grease. )

There are two basic approaches:

1.  Start with the bags consumers drop at the exit of grocery stores.  It is common sense to expect this mashup to be the most inconsistent due to the mashup nature of the inputs.  It will always be pigmented by definition.  We have not found one which can be made into film thinner than 2 mil.

2.  Collect film from the back of the grocery store – stretch wrap and discarded shrink bundling film. These have a little contamination from paper labels, but it is minimal.  Film will be dingy and cloudy, but not pigmented.

Either way, if you are looking to source post consumer film, make sure the raw material has been what is known as “line washed”.

We have found a steady, reliable, certified source which utilizes option 2.  For the obvious reasons, we will not divulge the source unless it is on a need-to-know.  The film is very strong from an elongation standpoint as might be expected from reincarnated pallet stretch wrap.  We blend it with two types of virgin for consistency of melt index and forgiving sealability.  We can make it as thin as 1.5 mils.  The texture is gritty but if the consumers like it all the better.  The way things are going with bag regulations, 100 % virgin poly trade show bags might be illegal. 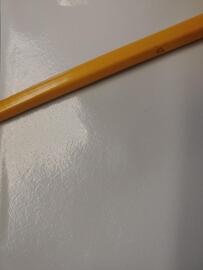 It will be interesting to see how this plays out. At this juncture ( April 15, 2020 ), post-consumer is 20 + % premium over utility grades of film grade resins. Will the market really be willing to pay such a premium for feel good politically correct plastic ? We’ll see.