Polyethylene is comprised of long chains of the building block ethylene monomer. Ethylene monomer
C2H4 ( or just "C2" for short ) looks like this in English: 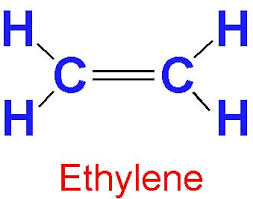 Ethylene monomer occurs naturally in both natural gas and as a component of naptha - the portion of a barrel of oil which cannot be refined into gasoline or oil.  So now you know that correlations between zillions of barrels of oil and plastic grocery bags are just more fake news.

Did you know ?  Climacteric plants produce ethylene to induce ripening.

How these chains are put together determine the wide variety of resin properties. The fancy name for this is molecular weight distribution, or MWD for short.  MWD influences the 2 main properties which dictate a resins's personaliity - density and melt index.  The variations determine what applications a specific resin will work for.

Polyethylene is the largest volume thermoplastic resin.  As such, it has a wide variety of uses.  Worldwide, there are probably hundreds of grades just for film alone.

Polyethylene is very inert.  The prelude to the iconic scene in episode 2 of season 1 of breaking bad illustrates this point.

The character Jesse called Walter from the store asking about what kind of plastic bin to buy.  Walter told him to look for the " LDPE 4 polyethylene " symbol on the bottom.  Jesse pours hydrofluoric acid packaged in a #2 HDPE #2 on the body in the bathtub.  After the bathtub falls through two floors, Walter explains that hydrofuoric acid is so aggressive that it eats through ceramic and metal ( but not polyethylene ).

Melt index (MI) measures viscosity by weighing the amount of plastic resin which extrudes from a cylinder with a hole in the bottom at 300 degrees for 10 minutes. The test method is ASTM D1238. The number of grams is the melt index, or MI.

A low melt index ( under 1 ) is referred to as a fractional melt  or less than a gram / 10 minutes.  Lower MI resins are used for pipe and profile extrusion.   It's common sense that resins with high viscosity (resistance to flow) are inherently strong. In film applications, fractional melt is suitable for shipping sacks and shrink film. Generally there is a trade off between melt index and clarity. The higher the melt index, the clearer the resin.  So a fractional melt is not a good choice when clarity is important and a high clarity "whole melt" or resin with a melt index of over 1.0 is not appropriate for shipping sacks.


This has been a very cursory basic introduction.  To learn about where polyethylene comes from, visit our
post .  Polyethylene is processed by almost every thermoplastic process.