The acronyms HMWHDPE and  UHMWHDPE are confusing.  This discussion breaks down high molecular weight jargon. 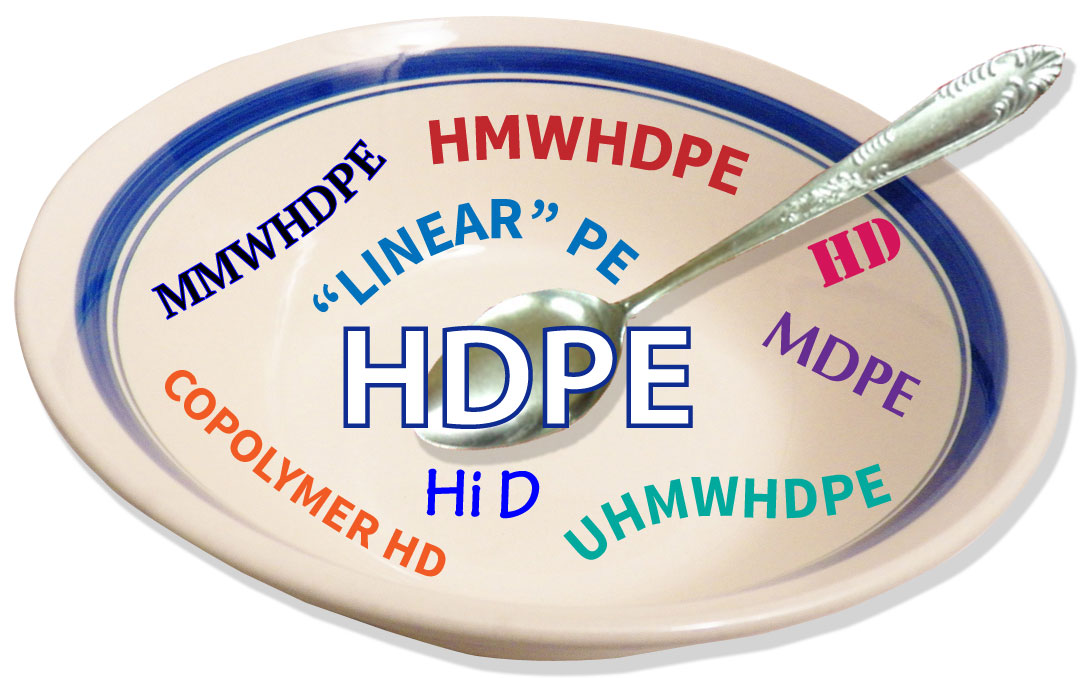 Without getting deep into the five geeky ways to measure MWD, suffice to say that a high molecular weight resin is concentrated, very crystalline ( little short chain brancing ) and very dense. No surprize that by definition the density is high - high density ( HD ), or over .940 gm / cc.

As you might expect, these resins are among the strongest polyethylenes pound for pound.  They are so viscous that the ASTM 1238 test for melt index had to be revised when the original Mitsui 7000F came along in the late 1970's.  Melt index is a measure of viscosity.  The test method consists of a cylindrical specimen in basically a heated can with a weight and a hole at the bottom.  The number of grams which come out of the hole in ten minutes is called the melt index.  This provides a crude predictor of the resin's personality.  Garden variety LDPE resins are about 2 grams or the verbal shorthand " 2 melt".   Mitsui 7000 F, American Hoechst GM9255F2 and Conoco / Dupont 5000 had values of + - 0.05.  So the HMW film resins are now tested with a " high load melt index", or "HLMI" which simply means higher weight to get a more meaningful sample.  Some prefer to make it sound more daunting by saying  "HLMIHMWDPE."  The most cotidien examples are single use grocery bags and star- seal trash bags.

Did you know ?  If there is not adequate haul-off speed, thicker HMWHD films will be weaker.  Why ?
the strength is a function of how well the polymer is "knitted" in the transverse direction ( TD ).  Here's how it works:  HMHD is made with a "stalk" or "wine glass" vis-avis "in the pocket" in LDPE.

When the elastic energy dissipates, the bubble is created.  The tear strength and is a function of how fast the melt is oriented in the TD.  Simply slowing the line speed will create weaker, "splitty" film.

UHMWHDPE as you might guess is an even higher protein version with molecular weights starting around 2,000,000.  Those are long chains.  That said, most grades are in the .928 to .941 range which fall into the category of medium density polyethylene ( MDPE ). You can't make blown film out of it.  It has to be cast, or made with a slot die.  It is very stiff and slippery to the point of having a weird self-lubricating effect.  This trait makes it a popular choice for conveyor belts. I recently had a partial knee replacement.  Instead of a meniscus, I have a stainless steel end of my tibia moving against an insert of HMWHD in my fibula.  ( i have an image, but it's not for the faint of heart ).  There are lots of uses - the most popular is pressure-sensitive tape commonly referred to as "poor man's teflon."